Do Bigha Zamin (Two acres of land) is a 1953 film directed by Bimal Roy. Inspired by Italian neo-realistic cinema, this film is known for its socialist theme and is an important landmark in the early parallel cinema of India, also considered as a trendsetter. 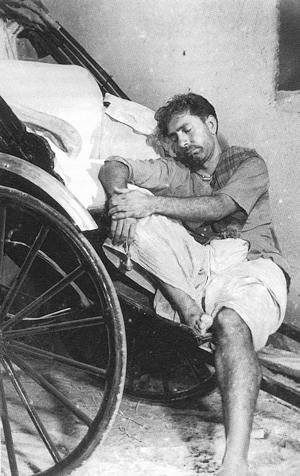 Shambhu taking rest on his rickshaw

Do Bigha Zamin is the story of Shambhu Mahto, a poor farmer a small village, and his family. The village has been badly hit by famine and after a drought of three years, it finally rains in the region. This brings a lot of joy to Shambhu as he knows that they can finally till their land of 2 bighas this year.

The village landlord, Thakur Harnam Singh wants to set up a mill in the village. However, there is a problem; Shambhu’s land lies in the middle of the area earmarked for the mill. Harnam Singh tries to cajole Shambhu in selling the land to him but Shambhu refuses to part with his land. At this, the infuriate Thakur asks Shambhu to repay the debt he had taken from him within three days. Shambhu calculates that he needs to pay 65 rupees to Thakur in total but is shocked to learn that Rs 235 is due on his name. Apparently the Munshi has fudged the accounts to inflate the debt amount.

Shambhu even goes to court to protect his land but does not succeed. The court directs him to repay the full loan within three months or his land will be auctioned and the money paid to Thakur to settle the debts.

A devastated Shambhu is then told that in Calcutta earning money is very easy and if he goes there and finds a job, he can certainly earn enough money to save his lands. So one day, Shambhu sets out for Calcutta while his wife Parvati and old father stay back in the village.

Calcutta is not very welcoming for the duo. They do not get help from anyone and even have their belongings stolen when they were sleeping on the footpath. Shambhu finally becomes a rickshaw puller and starts working hard to save money while he and his son live a poor life in a slum. Kanhaiya takes up work as a shoe shiner to help his father.

As the three months near completion, Shambhu becomes more anxious about saving the money and starts working even harder, which results in rapid deterioration of his health. One day a rich man hires his rickshaw and tells Shambhu that he will pay him handsomely if they win the race. In the hope of the money, Shambhu keeps running faster and faster he meets with an accident and injures his leg. In spite of this injury, he keeps working.

Hearing no news of her husband and son, Parvati becomes very worried and comes to Calcutta looking for them. However, while trying to flee a rogue, she comes under the wheels of a car and gets injured. Shambhu finds her on the road in a critical condition and takes her to the hospital.   Life plays a cruel trick on the poor family again; to save Parvati’s life, they have to spend all their money which they had saved to get back their land.

A broken Shambhu returns home with his family. Back at the village, their land is being auctioned and his old father goes mad, unable to bear this shock. Shambhu goes to see his farm one last time and tries to take a handful of soil from his land, but is stopped and chased away by Thakur’s guards. The film ends with the family of three walking away from their land.

Shambhu and Kanhaiya in better days

Do Bigha Zamin is a sad film. What makes it more hurtful is the realization that between the India of 1950 and that of 2013, not much has changed for the Indian farmer. In today’s India, we have thousands of Shambhus, committing suicide in the hinterlands of Vidharbha or forced to pick up guns in the plains of Orissa. This film is not a figment of the imagination of the Director in order to create an ultimate tragedy, it is a part and parcel of millions who toil in the hot sun every day, gaining very little and often losing everything.

The film is high on melodrama but considering that it is an Indian film, that can be easily discounted. Bimal Roy was very influenced by Vittorio De Sica’s “The Bicycle Thief” and hence Do Bigha Zamin has many similarities with Sica’s epic. However, that does not take the credit from the film which it deserves. The Director has his heart at the right place and even though melodramatic, overly tragic and influenced, the film looks totally genuine and convincing. There are scenes like Shambhu crying helplessly at his fields or the famous rickshaw race sequence touch and sadden the viewer by the magnitude of their own humaneness.

In its tragedy and depiction of abject poverty where a family is destroyed for the need of just $5, Do Bigha Zamin has an inherent beauty. The poverty of Shambhu is not humiliating; instead, there is a quiet dignity attached to his misery which is heartening. In spite of his need for money, Shambhu decides upon the rightful means to earn it and never wavers from his ethics. This is something which made old India and which seem to have been eroded to a great extent. The film depicts the indivisible nature of this poor family, each member of which walks in complete unison with others for a common purpose, the very fabric of traditional Indian society. In the end, even when they have lost everything, the family remains intact.

Coming to the performances, Balraj Sahni played the role which would make him immortal in the annals of Indian Cinema. Nirupa Roy and Rattan Kumar play their part well.