Uski Roti (Eng: Our Daily Bread) is a 1970 Hindi film made by Mani Kaul. The first film of Mani Kaul, Uski Roti is based on a story by the same name by Mohan Rakesh. It is considered a landmark in the history of New Wave Cinema in India.

Uski Roti is the story of Balo whose life revolves around her surly, Truck Driver husband Suchha Singh. She walks for miles every day to get food for her husband and wait for him as he drives past the village. He lives an independent lifestyle, idling with his friends and spending time with his mistress; and comes home only once a week while Balo is expected to be the ideal wife. Day by day, her concern for their dying relationship grows as she starts to doubt his loyalty. One day she gets late, trying to save her sister from a lecher in the village. Suchha gets angry and drives away without taking his food, and a dejected Balo decides to wait till night…

“When I made A Day’s Bread, I wanted to completely destroy any semblance of a realistic development, so that I could construct the film almost in the manner of a painter.”

-Mani Kaul, in an interview. University of California Press, 1998

Uski Roti, Mani Kaul’s first feature film is to Hindi Cinema what Pather Panchali or Meghe Dhaka Tara is to Bengali Cinema. Kaul takes an ultra-realistic approach, much in the lines of the Bressonian way of filmmaking, with a striking visual appeal. The Director takes a minimalistic approach as far as words are concerned, they are spoken few and far in between. There is a lot of emphasis on the foreground, face, eyes and most notably hands. The hands get a life of their own; be it the outstretched hand in the opening shot, or the ones gripping the tiffin-box and retreating at the coming of thought, the hands come alive in the frame and narrate what the director wishes to convey without uttering a word.

Uski Roti is not for everyone. It is a film where the narrator rejects all the established norms of storytelling in Cinema and ‘invents a radical ‘organic’ space that elongates the passing of time.’

“I constructed A Day’s Bread shot by shot, in this second way, so that the “figure” of the narrative is almost not taking shape in realistic terms. All the cuts are delayed, though there is a pre-empting of the generally even rhythm sometimes, when the film is a projection of the woman’s fantasies.” 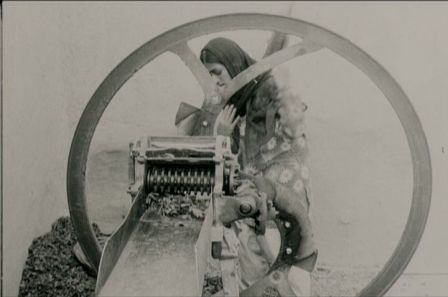 The film is slow and may seem boring to people, especially the repeated shots of face and hands from a different angle. But this film needs to be viewed with a different mindset. The filmmaker never intended to entertain, neither did he want to tell the story; instead, he lets the story narrate itself. The languid pace and the extended frames make one think and retrospect. As Mani Kaul himself says, “The film is about waiting; it is deliberately slow.”