27 Down is a 1974 Hindi film directed by Awtar Krishna Kaul. The film is based on Ramesh Bakshi’s Hindi novel Athara Sooraj ke Paudhe and has Rakhee and M.K. Raina in the lead roles. It was the first and only film of Awtar Krisna Kaul before he died in an accident in 1975.

The film is set in the 27 Down Mumbai-Varanasi Express which carries Sanjay to a pilgrimage to the holy city. In this journey, he reminisces about the older days, on his early days on trains. He aspires to study art but has to give up his dreams and join the Railways due to the persuasion of his disabled father who thinks a stable job in the railways is the best future a young man can get.

The days are monotonous as Sanjay works on the suburban trains in Mumbai as a ticket checker. The one day he meets Shalini, a LIC employee, and his life changes forever. They develop a rapport and Sanjay finds that they have a lot in common, that life can be looked upon with a new perspective. As they explore their relationship, Sanjay realizes that he is in love and feels that Shalini also loves him. He goes with Shalini to meet her grandfather but is shocked when she introduces him as a married coworker. He is completely at a loss to understand why she had to lie and behaved as she did.

Meanwhile, Sanjay’s father comes to know about their relationship and fixes his marriage with another girl. Sanjay is not able to stand up to his father for his love. This marriage turns out to be a mistake and he yearns to break free. On another train journey, he bumps into Shalini again. But this time he realizes that they no longer have anything in common. 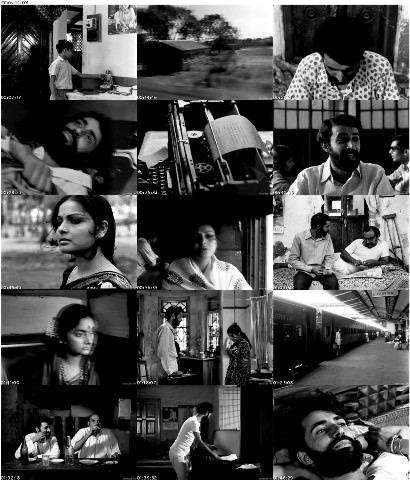 27 Down is one of those forgotten gems of Indian cinema which deserved more audience that they actually got. Even though the film made 40 years back, it remains ageless in its treatment of the relationship between a young couple, as they come together and try to find self in the other through their talks, jibes and most important- silence; even the Yo generation may identify with that (given they still have some taste left for good cinema). It is not difficult to become a part of the protagonists’ life as they meet, travel together, pause for conversation over some tea; the want they generate in the viewer to see them reach the next level of their relationship seems the most natural thing.

This is a quiet film, there is not much melodrama, no dialogues high on emotions, no gesticulations; the film rather decides to depend on the language of silence to make its point. Sanjay is a subdued character, overshadowed by his domineering father, but a lot goes on in his mind. In fact, the first words that we hear in the film are musings of his subconscious mind: “Fir koi pul hai kya? Pul hi hai .. ” (Is that a bridge? Seems its a bridge ..”).

As the characters of the film travel to and fro their destinations, living the day and surviving for the next, a silence settles down in their lives. The story seems to float in this silence, sometimes brooding on the past and sometimes getting surprised at how much that past comes back to haunt the present.