36 Chowringhee Lane is a 1981 English-Bengali film directed by Aparna Sen. It is the debut film of Sen as a director and has Jennifer Kendal, Dhritman Chatterjee and Debashri Roy in prominent roles. The film was critically acclaimed upon its release and went on to become one of the most prominent films of Bengali art cinema. 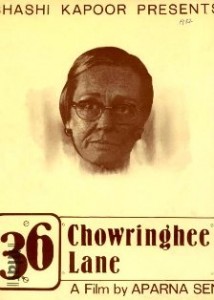 The film is set in the Calcutta of 1970s with the only the very faded memories of the British Raj. Violet Stoneham is a mousey old Anglo-Indian teacher who lives alone in her small flat at 36 Chowringhee lane. After the marriage of her niece Rosemary, and the hospitalization of brother Eddie, there is only a black cat ‘Sir Toby’ which keeps her company. Her only hobby is Shakespeare who she teaches to her clear, despite much enthusiasm on their part.

On a Christmas day, Violet is thrilled to meet a former student Nandita and her boyfriend Samaresh, who is a struggling writer. The couple is forced to meet in parks and restaurants for want of a better place. Violet invites them for coffee and while at her home they realize that the place would be perfect for their rendezvous. Samaresh requests  Violet if he could use her residence to work on his novel while she was away at school and she readily agrees.

Slowly Violet becomes fond of Nandita and Samaresh and they become like a second family to her. The loneliness in her life is replaced by a companionship, they spend time with her, take her out and make her feel as if her life has turned for better. But eventually, they get married and go on with their own lives and Violet is left behind, a perceived misfit in their society.  On Christmas, she wants to meet and surprise them with a home-baked cake, however, a different surprise awaits her…

There is something in the air of Calcutta that brings art and class to whatever it inspires. A lot of Calcutta seems to have rubbed off on 36 Chowringhee Lane, for it is both a beautiful piece of art and a very classy one at that. One of the most authentic films over the lives of the Anglo-Indian, stuck in a dignified time-warp whereas India has moved on, the treatment of the film is such that would have made Ruskin Bond proud.

The characterization done by Aparna Sen is remarkable and the performance complement perfectly. Jennifer plays the role of a quiet and amiable woman who is surrounded by the loneliness in her advanced years, yearning for companionship. At times, it becomes difficult to believe that it is acting that she is doing, be it her demeanour, body language or accent, she becomes Violent herself. She is elegant and certainly enjoying the role of a lifetime. It is difficult not to feel a slice of the pain she suffers from and be a part of the film. The roles of Nandni and Samaresh has been etched carefully and Debashree and Dhritman do justice to their roles. The art direction by Banshi Chandragupta (who had worked on Apu Trilogy) and camera work by Ashok Mehta complement the mood of the film, with low lights and subdued colours. Calcutta looks so beautiful through the lens of Mr Mehta.

This film is a quiet one, with definite shades of melancholy and sadness. The symbolism used in the film, of a community left redundant in a new country is shown in a very subtle manner. A sense of decay, be it the ageing people or the crumbling buildings, is evident in the narrative. On an emotional front, it manages to touch the right chords without getting too emotional. Loneliness, age, selfishness, generosity, grace, dignity .. the director manages to handle these complexities with amazing ease. Back in the days when premarital sex was still a taboo in Indian cinema, Mrs Sen has been both bold and dignified in depicting it.

The closing scene of the film breaks your heart, as Violet walks back to her home, alone except for a stray dog.  She recites lines from King Lear, another old person who made the folly of believing other.

Pray, do not mock me;
I am a very foolish fond old man,
Fourscore and upward, not an hour more or less,
And, to deal plainly,
I fear I am not in my perfect mind.

Violet in her class