Amma Ariyan (Eng: For the information of my mother) is a 1986 Malayalam film directed by John Abraham. The film revolves around the death of a Naxalite, after which his friend must travel to his village to inform his mother of the death of her son. Amma Ariyan was the first film of the Odessa Collective, made from donations received from the public, and the last made by Abraham. It is considered a landmark film in the history of Indian and Malayalam cinema.

Amma Ariyan is the story of Purushan who is preparing to leave for Delhi to pursue his research. Somewhere in the forests of Waynad, some policemen stop the vehicle in which he is traveling, to carry the body of a man who was found hanging from a tree. The dead man’s face seems familiar to you and he sets upon a quest to find the identity of the man, abandoning his plans to go to Delhi. Finally, after meeting a lot of people, he is able to identify the man as Hari, a musician, and activist.

Hari’s mother lives in Cochin and Purushan must now travel to Cochin to deliver the news of the death of her son to the woman. Together with Satyajit who used to accompany Hari’s music group, Purushan starts his journey. As they pass through towns from which Hari had once traveled, the group swells, joined by many others who used to know Hari. Through their recollection, the complex identity of Hari comes out, a loner, introvert, and weak in the eyes of some, while for some others, a revolutionary with great will power. They pass through a state still stuck in its colonial past, of people and revolutions, mass resistance, and meet participants of the uprisings. Purushan writes the story of this troubled society and the class struggles in a long letter to his mother, also a story of guerrillas and staged encounters.

As they wait near a church for Hari’s mother to come out, the group wonders about it all and about the failure of armed resistance. When his mother comes, she asks if it was a suicide. In the closing scene, Pusushan is seen wiping Hari’s mother’s tears. 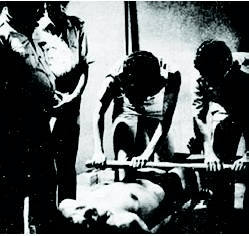 Amma Ariyan is in the style of a documentary and mixes facts and fiction in a complex narrative. Since its release, the film has attained cult status and has been the subject of many scholarly studies. The director uses metaphors throughout the film which though obscure at times, are quite powerful. One of the most important metaphors used is ‘Mother’; almost everyone in the film joins Purushan’s troupe going to inform Hari’s mother after informing his own mother. While one mother sees off her son to unknown lands, asking him to write letters to her, the other mother waits for the news of her son’s death. Between these two, there are several more mothers, worried about their sons. These mothers together become a nation, and their sons – the citizens, the family – the system. Does the director want to show how the nation was anxious about its citizens who have walked out from the system for a cause common to them?

The dead body of a Naxal and a revolutionary depicts a dead revolution that is difficult to identify at first but slowly joins together, people who are not politically inclined but are driven by a single cause, that they have to deliver the news to Hari’s mother. This is very similar to the society of today where politics is not driven by a fresh ideology but is more like mobs carrying the corpses of previous revolutions and their martyrs. What is the fate of this crowd after Purushan has accomplished the task? Do they scatter and go their own ways or catalyze into something else? Does the crowd manage to become a movement?

At the end of the film, the mother is waiting for the tragic news about her rebellious child. As she is told about his fate by the group, police also arrive at the scene and deliver the same piece of information. However what is not told is, how Hari died. Did he commit suicide or was he killed by the system he had walked out of? John Abraham leaves these questions open to the viewer. It is these questions that make Amma Ariyan one of the most important films ever made in India.

Amma Ariyan was the first film made under the banner of the Odessa Collective. John Abraham’s friends wanted him to make it in a “people’s cinema” which would aim at showing good meaningful cinema to the people and would not be driven by the forces of the market. The funds for the films were collected by traveling from village to village, through street plays and skits, and by a contribution from the general public.