Bandini is a 1963 Hindi film directed by Bimal Roy. It is based on a Bengali novel Tamasi written by Charu Chandra Chakraborty. A female-centric film, a rarity then and even now, Bandini tells the story of a female prisoner, her suffering and sacrifice. Bandini is considered the best film made by Bimal Roy and one of the crowning achievements of the Indian Cinema. 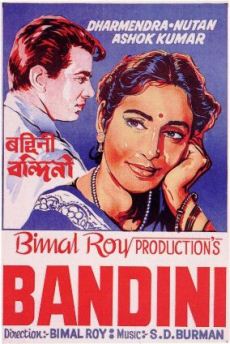 Bandini is set in a prison in pre-independence India where Kalyani is serving a life term for murder. As she tells the circumstances of the crime to the jail doctor Deven, the story goes into a flashback, to a small village in Bengal.

Kalyani is the young daughter of the village Postmaster who falls in love with Bikash Ghosh, a freedom fighter. Bikash proposes to her and her father agrees to the marriage. He leaves the village with a promise to her that he will return soon, but never comes back. Broken by the taunts of the society and unable to bear the suffering of her father, Kalyani sets for the city in search of Bikash.

In the city, Kalyani takes the job of a nurse for a mentally ill woman, who she later recognizes as the wife of Bikash. She also learns that her father came to the city looking for her and met a tragic end in an accident. In a moment of rage, she holds Bikash’s wife responsible for all her misfortunes and kills her by poisoning.

Back in the jail, Deven falls in love with Kalyani who is to be released from the jail. He willing to marry her and his mother accept her as well. As she leaves for Deven’s house where happiness awaits her, she finds Bikash, now terminally ill, in a bad condition at the ferry and decided to look him, sacrificing her future again.

Bandini has been called Bimal Roy’s ode to purity, the most striking aspect of the film is its simplicity. It also stands apart in being a woman-centric film an industry which has traditionally been the playground of heroes (and anti-heroes). It does so without putting women on a higher pedestal, Kalyani is not just condemned guilty but she is an actual convict and the film make no effort to clear her of her crime. Roy’s love for realism is reflected in the characterization of the protagonists. Be it the gentle and innocent Kalyani, serving her term in the jail, or the two men in her life; they are real people and not caricatures of how they should be.

Bimal Roy has been known to use symbolism powerfully in his films and Bandini is no exception. The strongest of the symbols used in the film are bars of the jail. They represent everything, the seclusion of the prisoners, separating them from others and imprisoning them within their hold. These bars represent the state of Kalyani, the fact that she forever remains a prisoner of her circumstances and love. They are so omnipresent that even Spring is seen from behind the bars. Another example of symbolism is the scene where Kalyani is about to commit the crime, represented by an ironsmith’s hammer striking the metal, depicting the state of her mind.

Performance-wise, Nutan shines in the role of a lifetime. Her beauty, grace, humility and seriousness with which she plays the sombre role of Kalyani is of the stuff legends are made of. Ashok Kumar and Dharmendra are both good in their roles. The supporting cast is effective.

One of the prominent features of the film is its music. Composed by S.D. Burman with lyrics by Shailendra, the songs are hauntingly beautiful, the most striking of them being “Mere sajan hain uus paar” and “O janewale ho sake to”.