Antarjali Jatra is a 1987 Bengali film directed by Goutam Ghose. Based on a Bengali novel by the name Mahayatra, by Kamal Kumar Majumdar, this film documents the life in 19th century Bengal, the status of women and Dalits. The film was critically acclaimed upon release and won the National Award for the best feature film in Bengali and was screened in the Cannes Film Festival. It is particularly remembered for the acting by Shatrughan Sinha, very different from the roles he played in the movies then. 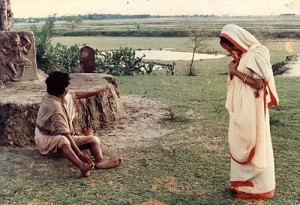 Antarjali Jatra is set in the Bengal of the 19th century, times of great social turbulence and the breaking up of old traditions. The Bengali renaissance had started raising its head but the old orthodox order was yet to loosen up its death grip on the society. Superstition and karmakand reigned supreme and the status of women had reached its abysmal point.

A nonagenarian Brahmin Seetaram is on his deathbed, counting his last days. An astrologer tells the dying man and his family that he will reach heaven and they will thrive in eternal happiness if his wife commits sati on the pyre. Though the anti-Sati law has been in place for decades, they manage to bypass it and convince a poor Brahmin to marry off his daughter Yashobati to the old man. The ‘married couple’ live on the cremation ground, waiting for the death of the ‘groom’ and quick disposal of the ‘bride’. 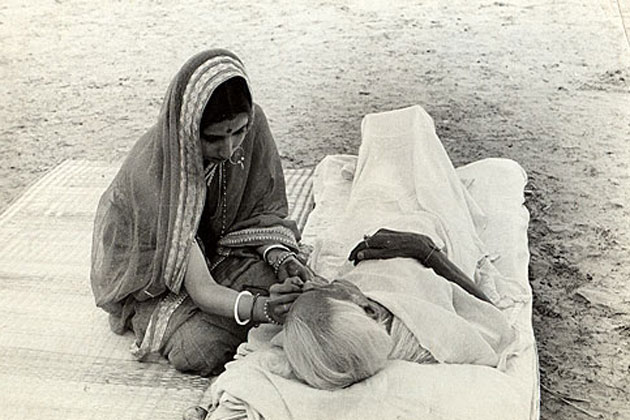 The cruel patriarchal society makes sure that the whole thing is set up perfectly, with just one problem. A drunkard chandaal Baiju, who lives on the cremation ground, finds the whole thing wrong and decides to prevent it. He tries to persuade Yashobati to run away but bound by the chains of tradition, she refuses. One night he tries to kill Seetaram and Yashobati, being the true wife she is, she tries to stop him. As they struggle on the muddy banks of the river Ganga, it turns into lovemaking. The waters of the river rise and both Seetaram and Yashobati have swept away.

Antarjali Jatra is not a happy film, there was hardly anything to be happy about in the period of Bengal when this film is set. Leaving its seriousness aside, the film is striking. Though Goutam Ghose was accused of an abdication of the responsibility of the national artist, and making it with an eye on the film festival circuits [‘shatters this project by staging the burning ghat as a realistic referent carrying a realistic amount of local colour, a stage for a broadly conceived psychodrama played out by easily grasped stock characters.’1 ]; it is still a hard-hitting film.

In the words of the filmmaker:

The times in which Antarjali Jatra, is set was one of great societal change, and re-awakening. The Bengal Renaissance of the 19th century challenged many customs and practices that had established themselves in Hindu Society through antiquity. Since the vast majority of Brahmins were illiterate, or even neo-literate, the Hindu scriptures were extremely vulnerable to misinterpretation and misrepresentation. It is in the 19th century that Sanskrit scholarship was secularized by the British rulers, who wanted to understand the ancient laws of the country they ruled. The Brahminical monopoly on the reading of ancient texts being broken, mainly by German and British Indologists, several distorted interpretations of Hindu laws came to be challenged, and specially the perverse rituals that these had perpetrated through the ages. Primary among them was Satidaha-the practice of burning Brahmin widows on the funeral pyres of their husbands or Suttee, as it came to be known to the Western world.

The cinematography of the film is one of its other strong points. Long shots galore, and the frames sometimes bring out the bare truth along the muddy banks of Ganga, and sometimes they have this brooding, lingering feel. Performances are strong, and Shatrughan Sinha must be mentioned for a role that is so unlike what he had been doing in Bollywood.