Gulaal is a 2009 Hindi film directed by Anurag Kashyap. Set in present day Rajasthan, this film explores the dark sides of power, royalty, student politics, quest for legitimacy and social hypocrisy through a fictitious secessionist movement which aims to create a separate Rajputana. 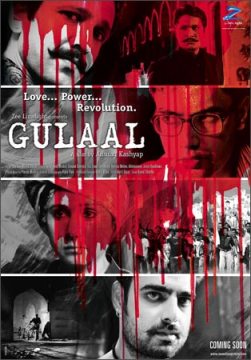 Gulaal is set in a fictitious town Rajpur, where Dilip Singh comes from Bikaner to study law. He gets accommodation in a run down British era bar, sharing the space with Rananjay Singh (Ransa), the estranged and disillusioned heir of an erst while king. Dilip is ragged brutally in the college by Jadwal and his gang, stripped naked and thrown in a dark hostel room; where Anuja, a young female lecturer, is interned in the same state. After Dilip is released, Ransa tells him to avenge the humiliation and give Jadwal a test of his own medicine. However they are outnumbered, beaten up and thrown out of the hostel. At this point, Ransa suggests Dilip that they take the help of Dukey Bana.

Dukey Bana is the uncrowned prince of his lands, a feudal lord who is setting up a private army with secede from India and establish a separate homeland for Rajputs – Rajputana, with him as the king. The other members of Dukey Bana’s family are his wife, a soft in mind elder brother Prithvi Bana, and ever loyal Bhati.

Gulaal was made at a time when Anurag Kashyap was a much angrier man than he is today; and this leitmotif of anger, in a heady mix of power and politics, is present through the film. The film is too colourful for a noir and yet as dark as it can be. There is nothing good that it depicts and the heavy doom that hangs over like a choking smog is not by accident but by design. It is a brilliantly crafted noose which tightens around the neck as the story moves forward.

Politics does not form the mere undercurrent of Gulaal, this film wears politics on its sleeves. Be it the Democracy Lager beer – “By the powerful people, of the powerful people, for the powerful people” , the songs “Jaise bina baat Iraq mein jake, jam gaye Uncle Sam” or the rants by Prithvi Bana, “Aaj ka launda yeh kehta hum to bismil thak gaye, apni aazaadi to bhaiya laundiya ke til me hai“; politics is evident everywhere, not presented to the viewer in sugar-coated words, but thrown in the face like red ink (or thick blood).

Gulaal has been called India’s ‘vivid chronicler of nightmares’; while on one hand it is an ode to all those poets of yore who had a dream from India, on the other hand, it evolves in the very manifestation of the shattering of those dreams, sometimes enacted in its dialogues and often in its songs. “Aarambh hai prachand” is a battle song in essence and can set your pulse racing with a rush of adrenaline and makes the Bollywood love songs seem so meaningless. The haunting “O Ri Duniya” is a tribute to Sahir Ludhianvi’s “Jinhe naaz hai Hind par wo kahan hain” with a reference to poets like Faiz, Momin, Pant and Jaishankar Prasad. The most striking of the songs is “Jab shahar hamara sota hai”, which breaks into silence as a slap on the face. How many films of today have songs with lines like this:

The music of Gulaal, written and sung for the most part by the prodigious Piyush Mishra deserves a place in Indian Cinema’s Hall of Fame. The stars of IPTA would have given a wry smile listening to these songs.

Anurag Kashyap has used interesting metaphors which gets mind-boggling sometimes. There is a painted half-man-half-woman Ardhnarishwar which keeps coming in the frames at Dukey Bana’s palace, apparently without any reason and probably symbolizes the inner demon with the director and a symbol of good and evil staying together. The soft in head Prithvi Bana is the only close associate of Ardhnarishwar, and represents any man-in-the-street’s powerless anger at the system, personified. Karan looks like an odd reference to Karna from Mahabharat, an illegitimate son who does not want to play second fiddle this time and is hell-bent of capturing power for himself. Clues are scattered in the film so randomly that one can forever keep looking for symbolism and never finish.

The characterization has been done in a way that performances are not held hostage to the screen time allotted to the actors. Even the Police Inspector, in his puny role, leaves a mark with his last dialogue. Jessica Randhawa speaks with her eyes and Deepak Dobriyal and Pankaj Jha excel in their roles. However it is the trio of Kay Kay Menon, Abhimanyu Singh and Piyush Mishra who tower above everyone else by their stellar performances. Each one of them can proudly consider Gulaal as the crowning glory of their acting.

The film is not without faults. The plot is the weakest link; it runs linear and though it envisions a huge canvas, gets  rather limited in execution. Will a sub-nationalist movement put all its stakes on the funds for Student’s festival of a college ? The war in “Aarambh hai Prachand” could have been more than a mere students’ election. Even the climax seems a little anti-climatic. However, these can be considered petty fault findings when dealing with a film of such startling magnitude. Gulaal, as a film, is so underrated that it should put any self-respecting lover of Indian Cinema to shame. It deserves much more…

Gulaal is available for online viewing on You Tube.