Bhumika is a 1977 Hindi film directed by Shyam Benegal and has Smita Patil, Amol Palekar, Anant Nag, Naseeruddin Shah, and Amrish Puri in prominent roles. Said to be based on a memoir of Marathi actress Hansa Wadkar, Bhumika tells the story of an actress and her search for identity and self-fulfillment.

Bhumika was critically acclaimed, noted for the strong performance of Smita Patil, and went on to win many National and International Film Awards. It is considered one of the landmark films of Hindi Cinema. 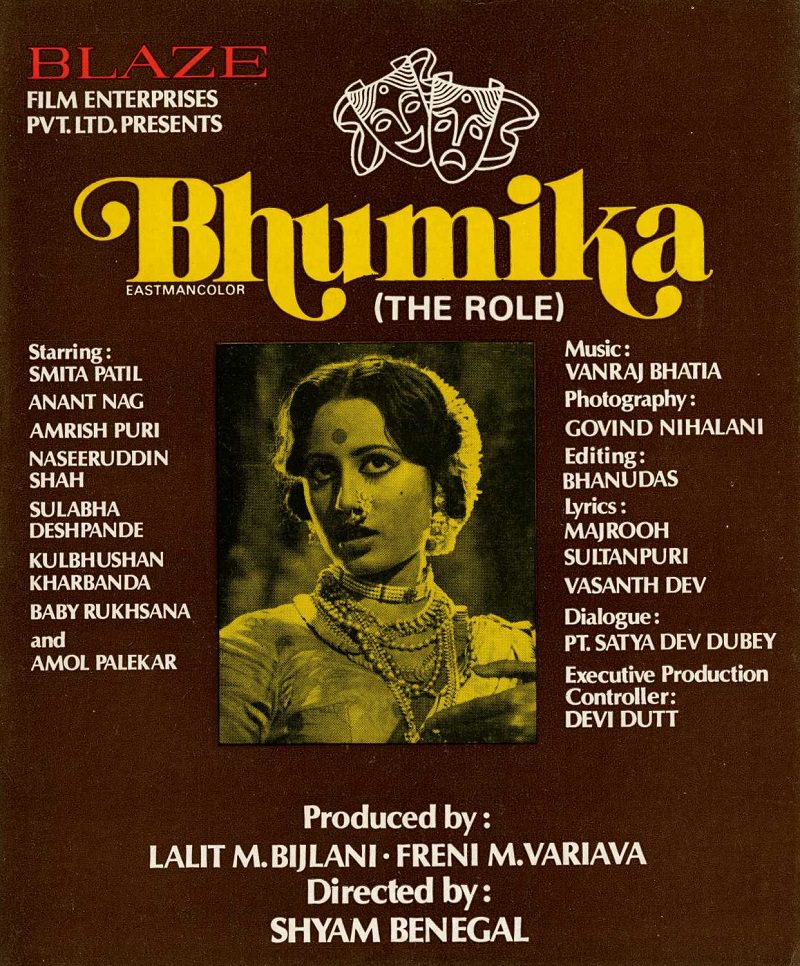 Bhumika is the story of Usha, a singer-actress in Maharashtra. As a child, she lives a fitful, unhappy life with her mother, grandmother, and an asthmatic father who is trying to drown his miseries into the bottle of liquor. Usha’s only escape from the overbearing world around her is her lonely flights into the woods and music, taught by her grandmother. It is then that Keshav comes into her life.

Keshav Dalvi is a family friend, and though a decade older than Usha, he has his eyes set on her. After the death of Usha’s father, Keshav steps in as the new man of the house. He recognized Usha’s talent and brings the family to Bombay where she gets selected in an audition. This is when the second chapter of her life begins. 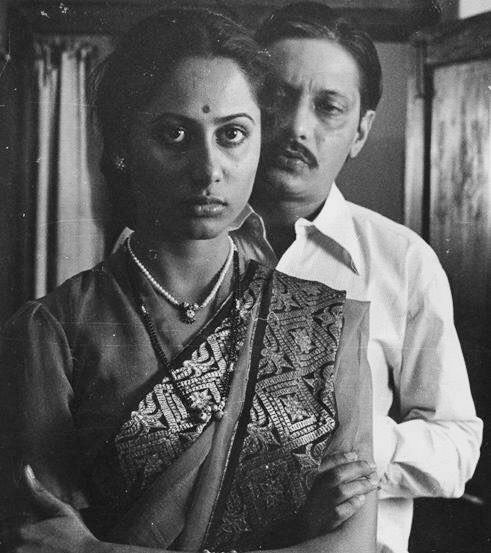 Usha rises fast in the film industry. Her co-star in several films, Rajan, is enamored by her. Upon seeing them coming close, a sense of jealousy and insecurity starts engulfing Keshav and he persuades Usha to marry her. Usha agrees to Keshav’s proposal, and also resolves to stop acting after her marriage. However, Keshav is not doing well in his business and the family needs her earnings, so she continues to work on screen. With time Usha has a daughter, but marital happiness and peace elude her. She feels suffocated in this relationship and runs to Rajan. However, he develops cold feet and would not take the plunge.

At this juncture, a new man enters Usha’s life, a young but nihilistic and self-centered director, Sunil Verma. She is taken by his charm and sophistication. When she gets pregnant, her husband forces her to have an abortion. Distraught, she cuts ties with Keshav has a liaison with Vinayak Kale, a wealthy landlord who takes her as a mistress. However, after a while, she starts feeling like a prisoner in his patriarchal household and writes to her estranged husband, who rescues her with the help of the police. He brings her back to Bombay, a city that still remembers her, to a drab hotel.

Usha returns to find her daughter grown up and married, coming to terms with the journey she has undertaken without finding any meaning of fulfillment. The film concludes with Usha, alone in her hotel room, receiving a phone call from Rajan. 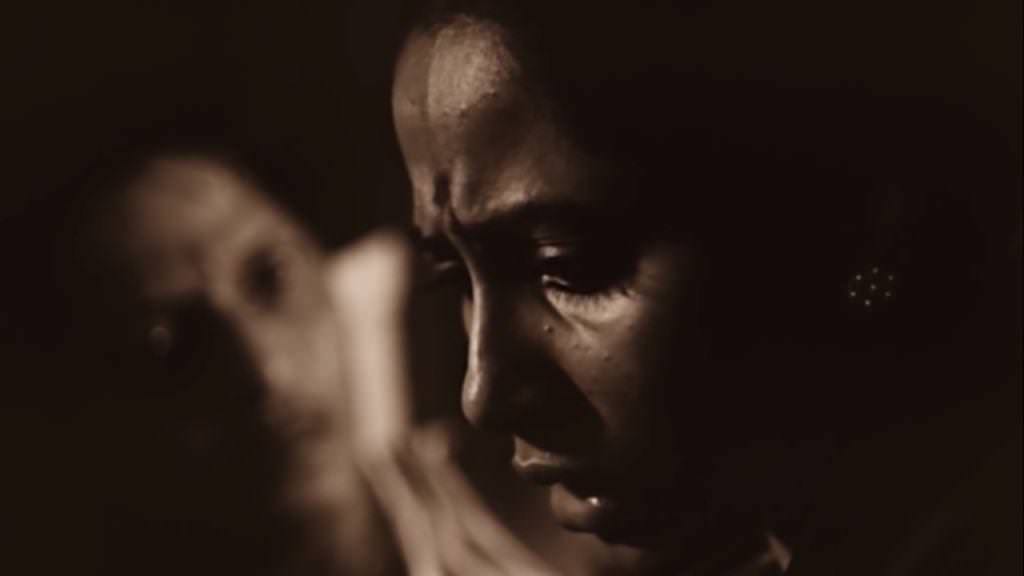 The 1970s saw the dawn of Shyam Benegal in the Hindi Cinema. When the mainstream Bollywood was waking up to the angry young man, Benegal was busy making films like Ankur, Nishant, and Manthan, which had strong female characters in a largely patriarchal society. In Bhumika, the woman is the central theme of the film. While Keshav, Rajan, Sunil, and Vinayak get strong roles, the film essentially revolves around Usha, Bhumika remains her story. 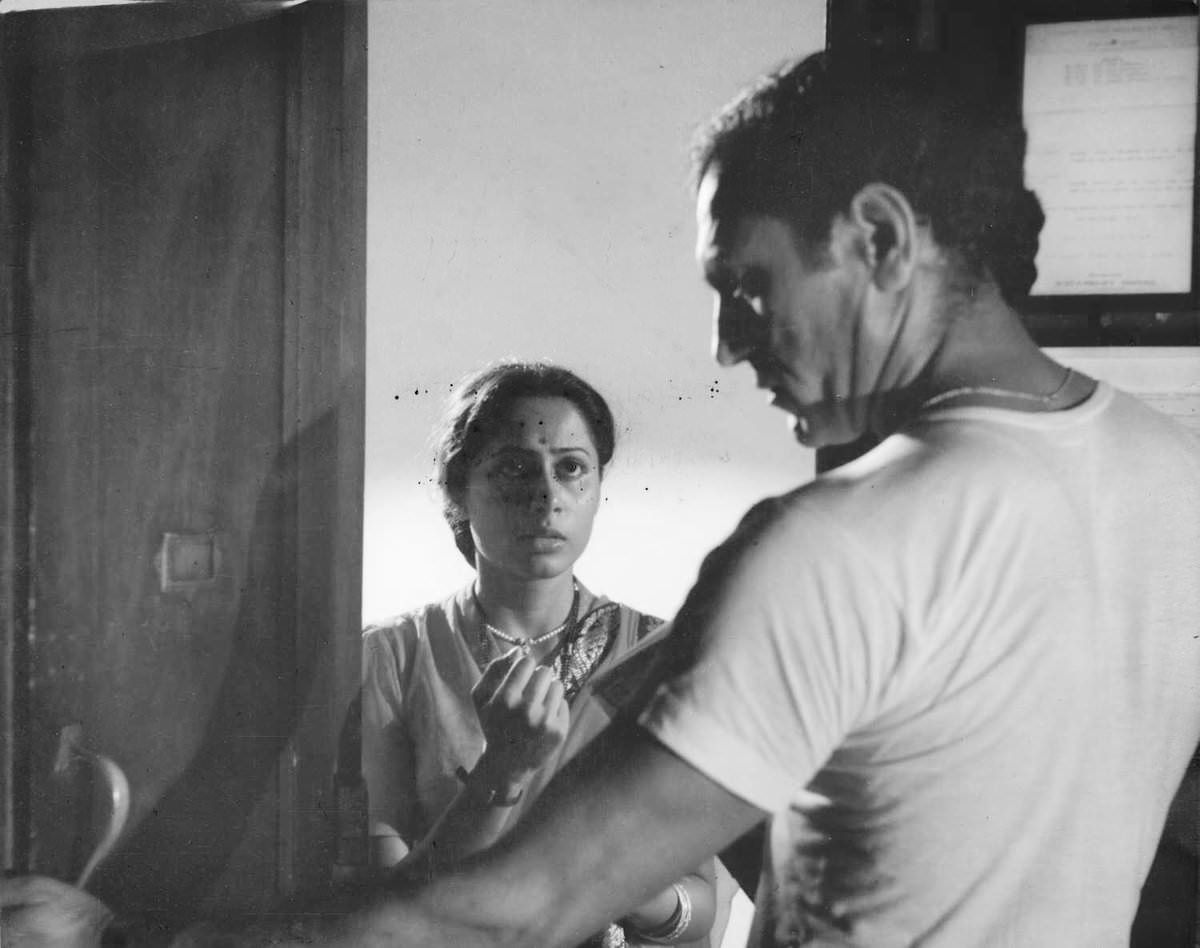 In an era when narratives were set by men, Bhumika carried a woman’s point of view. With this film, we embark on a journey to watch the transformation of Usha from a naïve child to a restless woman who is trying to figure out who she is and what does she want from life and relationships. Talking of relationships, Benegal does not measure them from the eyes of a man. There are no war cries of feminism, the discontent is a subtle undercurrent. There are no dramatic victories either. Trapped in unequal and suffocating relationships, Usha keeps trying to break free, only to be held back by the chains of the society and told, “beds change, men don’t”. The stark realities of life never give way to fantasies of a grand revolution.

Bhumika was based on the autobiography of Marathi theatre and film actress of the 1940s, Hansa Wadkar who led a life that was unconventional and rebellious by the standards of that time. She could not have been portrayed better by someone other than Smita Patil, who stands tall above everyone else in a role of a lifetime.

[First published in the article ‘To Dream the Possible Dream’ – Shankar Menon, 1978]

Bhumika, untouched by political idealism and strongly sensitive to the agonies of a talented woman, will perhaps get the best reception from critics. Audiences have always responded to his (Benegal) films,  but here may well respond least of all. Shyam Benegal here talks most to the concerned intellectual (it is unfortunate that the unconcerned intellectuals number so many) and popular appeal is therefore likely to be limited.

Bhumika is astonishingly given an ‘A’, for Adult, certificate. One’s worst fears come true. Its initial run in Bombay was sold out for two weeks by unprecedented advance booking. A predominantly male audience grows restless with mere undress to petticoat and acceptance of unwed motherhood. Stereotypes have been broken, the audience is puzzled that the really bad cannot be told from the unreally good. Women who would have benefited most from the struggles of their sister under the skin, are kept away from the film by their husbands and fathers. 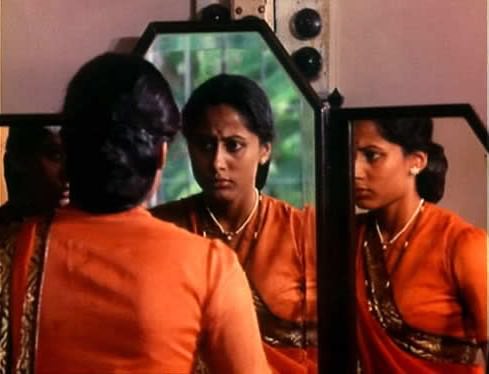 The director has decided a direct inner confrontation of the actress with gentleness, an unstated compassion. Her succession of lovers is nowhere stated to be perverse, and an otherwise reasonable critic dubbing her a nymphomaniac betrays deep prejudice.

Surely a woman can live on the same sexual terms as men? Our hypocrisy will not admit it, the sanctity of woman veils the sanctimoniousness of man.