Streer Potro, or the Wife’s Letter turned out to be another avant-garde piece of Cinema from Aneek Chaudhuri’s closet. Firstly, when someone gets exposed to a film with such a title, one would definitely find himself/herself familiar with Rabindranath Tagore’s short story of the same name i.e. Streer Potro; however, this film is entirely differently and is based on the artistic combination of Salvador Dali and Rabindranath Tagore. 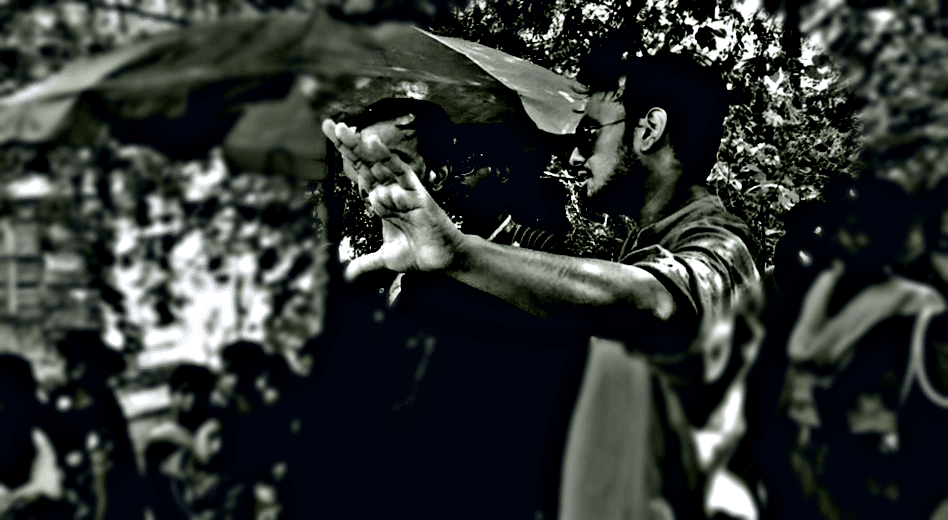 The director of this film, Aneek has completely focused to showcase abstract imagery in this film and has also, been successful in doing so. Beside this, melody is something that drives the film forward with Rabindra Sangeet with a hint of Dali in it, which we will discuss later.

As already discussed above, Streer Potro is not completely based on Tagore’s story, it is worth mentioning that Tagore’s piece has only been used a prop here, though it was treated to be an integral element. Moreover, Dali’s imagery forms have overpowered the whole storytelling structure. Now, the whole story revolves around the theme that ‘Mathematics is never sufficient to prove the validity of verbal language and emotions’; let’s discuss why. 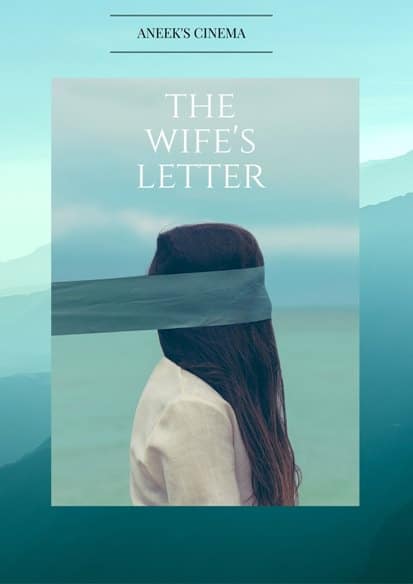 Poster of the film

The male protagonist in this film has been named X who relates himself to different persons; now, comparing this to maths, X is a variable which is trying to achieve a constant value. In Streer Potro, the constant is a LEAF. The very leaf has been used as a medium to exchange thoughts, ideologies and feelings between two different persons. But, unfortunately as a matter of fact, X is too whimsical to achieve the constant value.

The film is structured into three worlds, which involves past life, present life and a life that has only been imagined without any real existence to the protagonist.

The Wife’s Letter is a film that comments on a number of topics including the unusual combination of Rabindranath Tagore and Salvador Dali. Firstly, it should be mentioned to you that the film is based on mathematics and hence, strongly focuses on the fact that emotions are better decoded when they are least calculated. Such is the significance of this movie as a study material that it convinced me to write a research article on this topic.

Beside this, it is also worth considering that the Wife’s letter is more of an abstract film and with its surrealistic nature, it leaves you open to a wide number of interpretations. 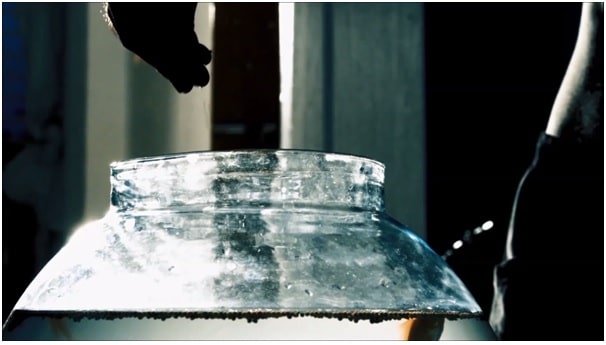 The film circles around three characters rather two unnamed characters and one of them named as X, symbolising the significance of the variable X in mathematics. The other two characters are both, X’s reel and real world.

X meets them in a bus where he had been travelling and this changed the whole course of his journey; soon the bus becomes the mode of schizophrenic visions and X starts to relate the passengers to his own life.

The Wife’s letter is a journey of three worlds which  travels in order to reach his ultimate destination or to find the CONSTANT as per the rules of mathematics. This is the whole course of the journey in the movie.

In this research piece, the significance of mirrored images will be studied especially the images that are not seen by the protagonist also reveals something about the situation. 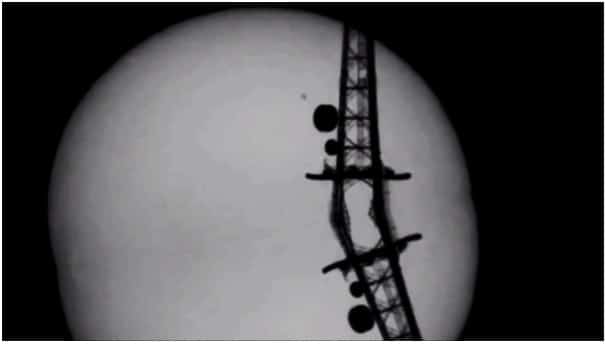 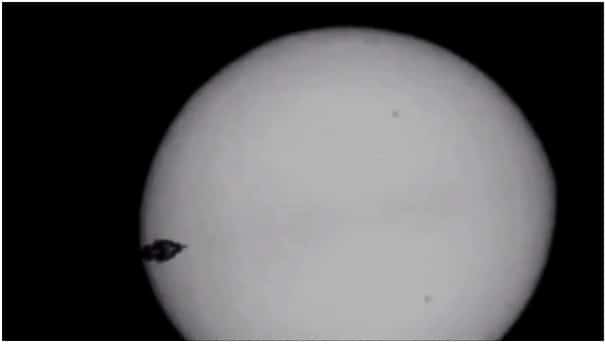 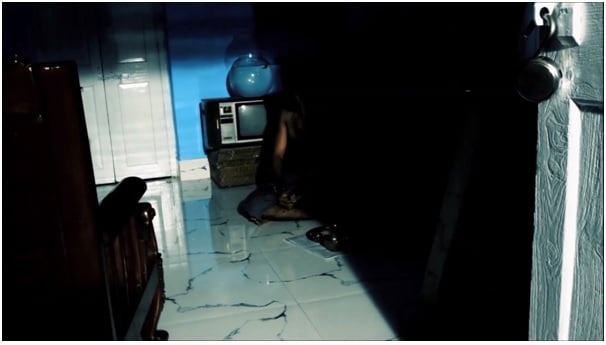 A man checking a fish in a fish-tank 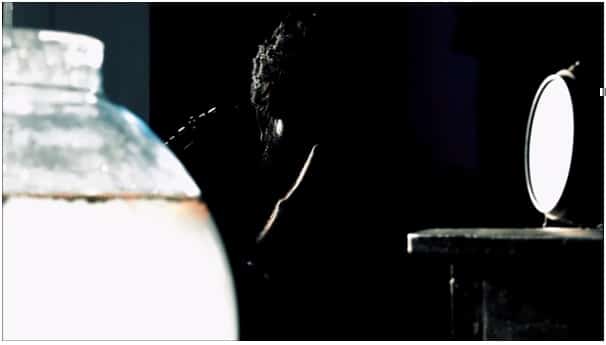 The man seeking satisfaction in checking the fish being fed

Here, I will be examining these five frames where each frame, although being related to each other depict something that is completely worth absorbing. Hereby, I will try to provide an objective view of what each action might suggest to the viewers and critics.

Beside this, the lighting is also worth considering and will be examined as well. Probing deeper, it can be claimed that the lighting actually reveals something which cannot be seen with the naked eye and can only be felt. For example, the fish tank with its surroundings in blue colour- it does reveal a lot.

Taking scene by scene, firstly, I would bring to notice the converging and mirror images of the setting Sun.

The film actually begins with such scenes when the Sun can be seen with its mirror image complementing it. It defines everything within the first two minutes of the film denoting the convergence of alter egos in a person.

Now, let’s probe a bit deeper. A sun is actually trying to deal with its mirror image and in the same way, the protagonist X is trying to deal tightly with his alter egos and schizophrenic condition but at the end ends up converging with it and the mirror image gets transfused into his personality.

Similarly, the setting sun finds it hard to get away from its mirror image and ends up converging with it. Now, dusk implies the almost arrival of darkness or death; hence, the sun is dealing with its death and in order to save itself from the impending destination i.e. death, it is actually running away from it.

The combination of black and white contrast life with death; hence, it can be said that life is playing tough hands with death.

The second scene is of the alter ego of protagonist X who is having a meal. Let’s assume him to be Y.

He can be seen completely immersed in his meal, but all of a sudden he turns up to the fish-tank. A fish can be seen swirling in water, which denotes the dilemma that is going within Y. Now, in this case, the fish tank is suggested to be the invisible mirror to Y. Or, in other words, the image can only be perceived or seen by Y.

Now, in the next frame, Y can be seen sitting in a chair and staring at the fish moving in the fish-tank. The frame where Y is still having his meal is juxtaposed with the frame when he is staring at the fish swimming in the fish-tank’ this provides with a humane approach of Y toward the fish.
Suppose, one is presented with an image where he/she is presented with a bowl of meal but at the same time, a starving child is crawling down on the floor. In that case, however selfish you may be, there will be a generation of humanity toward the child; in this case either he will stop eating the food and give it to the child, or share it with the child on equal terms. In the second case, it is more like conserving an else’s personality in your own identity.

Now, in the next frame, Y rises up and goes to feed the fishes. But, here humanity arises from another angle too which is partly seen. Y was feeding himself upon a platter of fish which makes him more generous toward the fish swimming in a fish-tank.

Blue lighting has been predominantly used in the scene where he is having a meal. As blue symbolizes liberty, the aquarium can be seen spotted by a ring of blue; however, it cannot enter inside and hence, the fish inside it can never be independent unless it gets out of the fish-tank.

In the same way, Y’s background is dark blue but he is staring toward the slight bluish ring on the surface of the fish-tank. In this way, he is actually not realising the things that he already possess i.e. liberty and hence, is surrounded by his generosity toward beings inferior to him. This makes him dependent on his emotions to survive.

The music has been orchestrated here by Saikat Chattopadhyay and in this case, the influence of Salvador Dali will be highlighted. It is worth considering that apart from the title track, Sarthak Janam Amar, Rabindra Sangeet has been accompanied with guitar strings. 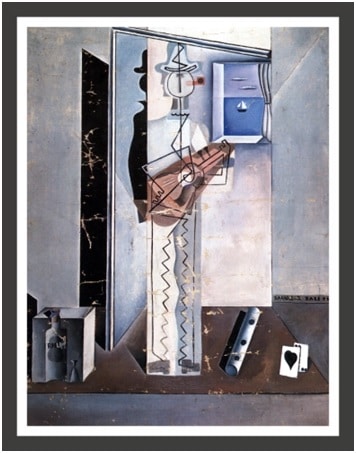 Pierrot playing the Guitar by Dali

In this painting, one can notice a single clown, which is in real the presence of two clowns; but they are designed in such a manner that the other clown seems to be in the shadow of the first clown and hence, an illusionary image gets formed. The art-piece constitutes shadowy blocks giving the impression of a collage standing in the background which once again fits to the theme of The Wife’s Letter by Aneek.

Aneek Chaudhuri, the director of this films has had his films screened at international film festivals of repute including Cannes, Los Angeles, Warsaw etc.; he is also an acclaimed film theorist with twelve research papers and five books to his name. He is the first Indian Director to be featured at INSPIRERY and LOS ANGELES RADIO. 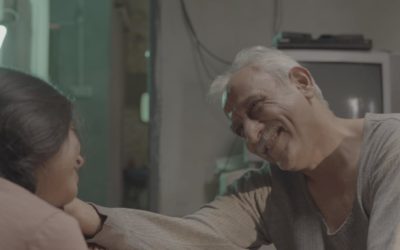