Oka Oorie Katha [Also spelled: Oka Oori Katha] (Eng: The Marginal Ones/ The Outsiders) is a 1977 Telugu film directed by Mrinal Sen. Based on an acclaimed story by Munshi Premchand, Kafan, the film is a scathing commentary on rural destitution and social injustice projected powerfully through its protagonists and a sincere narrative.

Oka Oorie Katha won the National Film Swards for Best Feature Film in Telugu and went on to get critical acclaim in international film festivals.

Oka Oorie Katha is based in the Telangana region of former Andhra Pradesh, a flight from the original location of ‘Kafan’ which was based in rural Uttar Pradesh. Venkaiah and his son, Kistaiah, live in a strange world of their own. Parasitic and work-shy in principle, they have a marked contempt for labor and mock those who work for a living. “The fools work hard and the rich enjoy themselves”, is how Venkaiah explains the dynamics of work.

They go out for work only when starving, never failing however to work less and grab more. Theft is no sin as long as it is confined to the barns and orchards of the rich. To the villagers, they are vagrant freaks and beyond redemption.

All of this is set to change when Nilamma, a village girl enters their lives.

Kistaiah wants to marry and the father is understandably upset. The old man believes that marriage leads to involvement and involvement leads to disaster. However, the son is adamant and a third person enters the lives of the two – Nilamma.

With all the orderliness that a woman can command, Nilamma tries to bring sanity to the household.

This is deeply resented by Venkaiah who feels marginalized and alienated. He does not hide his bitterness and fights back vehemently. Nilamma, for her part, shares the same antagonism with her father-in-law.

The rest is the story of the three – Nilamma working hard to bring order in the family, Venkaiah going his own dreadful way and Kistaiah torn between the two poles. With time, Nilamma realizes that the men are beyond redemption and takes it upon herself to work harder, even when pregnant, and earn money to feed the family. However, the bitterness continues to grow within the household.

Nilamma’s misery is over in a tragic manner. One day the men come back after another petty theft, they find Nilamma in acute pain. Venkaiah refuses to call the midwife and by morning, his daughter-in-law has died.

The father-son duo collects money from the villagers for her cremation but spends it on liquor. The old man has a few wishes – food, clothes, a house and that the dead girl comes back alive.

While Kafan, a brilliant story by Munshi Premchand, explores the world of ultimate poverty in eastern Uttar Pradesh, Mrinal Sen makes it pan-India and shifts the narrative to a remote village in Telangana. The film is a ‘blistering, absurdist critique of the relentlessly exploitative ways of a feudal landlord exacting total submission from his helpless subjects’.

The narrative is stark, without pity or drama, and does not shy away from the dehumanization that abject poverty brings with itself. The father waits for his son’s wife to die in childbirth, for when she is going to die after all, why make her suffer by reviving her. On her death, the father and son beg for money to buy a kafan (shroud) and then drink it away at the village liquor shop. Sen decides in favor of being brutal and the impact is direct.

Sen builds a fine tension between individual character and environment. The rhythm of the film has three main movements – life before Kishtaiah’s wedding, when the father and son live in a happy partnership – defiant, lazy, mocking ‘ regular labor’, exploitation in a petty way their exploiters, mouthing false bravado – symptoms typical universal culture of poverty. Then the son’s wedding disturbs the equilibrium. The woman actually works, she detests the old man and he, in turn, feels that his old way of life is being destroyed, apart from a sense of estrangement from his son. The son in turn wavers between drudgery in thrall to a feudal system and the old anarchic-animal existence. It is in the sequences after the wife’s death that the director departs from the author. The scene in the liquor shop is replaced by the image of the father sitting under a tree, holding fast to the money collected for the shroud and shouting, “give me food, clothes, a house” and finally, “Let her come alive!” as his daughter-in-law’s face is engulfed in the final dissolution.

“The evil spirit of work will not let you free; if you fall into that trap, you are lost.”

The futility of labor is an interesting concept explored in the film. The drama of self-imposed destitution with a vocal contempt for labor, which as per the protagonists, only serves to make the exploiters richer finds resonance with the anti-profit aspects of the socialists of that time, except that they were not brash enough to declare work as an exercise in futility. The conventional wisdom regarding the necessity of work provides a sublime twist to the rural exploitation of the serfs by the lords. This Utopian dismissal of the conventional standards of labor is difficult to find a peer in the Indian Cinema, making Oka Oorie Katha a very unique film. 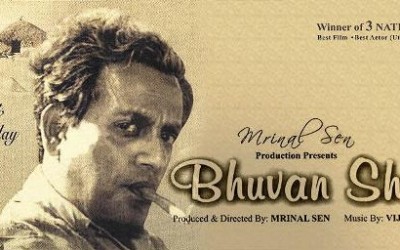